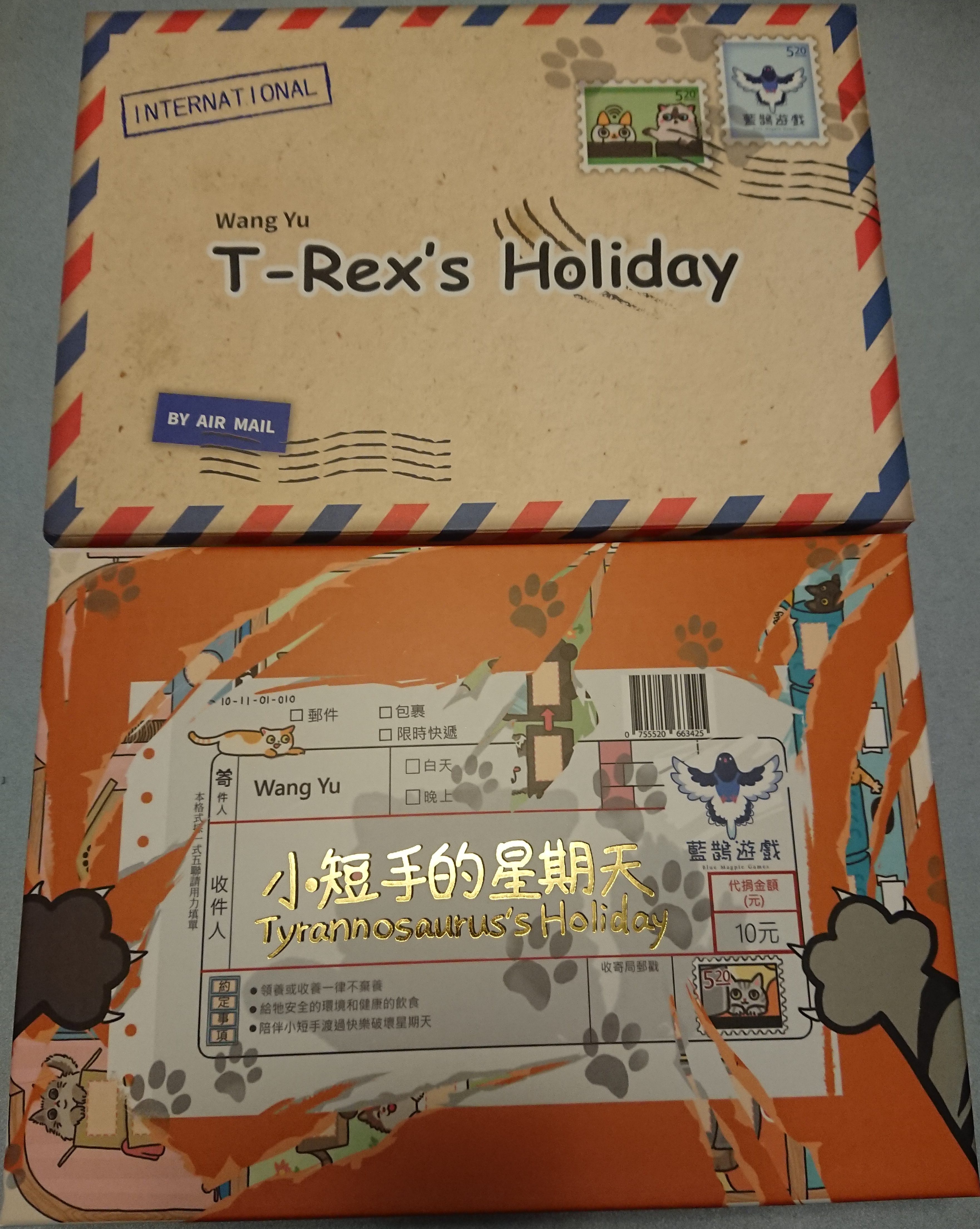 You can find this post also from BoardGameGeek if you wish to check it out from there.

You can find the rules for the game from Taiwan Board Game Design shop’s page for the game or with the same link, directly from Google Drive.

Welcome to…
Roll Through The Castles of Burgundy! There’s No Siesta at Saint Malo Avenue, Yah Tzee? Only SteamRolled Zooloretto Harvest. But a Second Chance for Imperial Settlers with Silver & Gold Brikks. Kingdomino has Lights in the Sky, while Cartographers work at Tucana. Ganz Schön Clever? Doppelt! Noch Mal!

Eh? Those are somewhat the games I’ve played with a roll/flip-and-write/draw mechanisms I remember. I give you one more here, Tyrannosaurus’s Holiday, or as it says on the International envelope, T-Rex’s Holiday. “DINOSAURS! Dino-Holiday roll and write!”, I thought. Well, not quite.

T-Rex is a cat. And it’s its holiday. Well, what is a holiday to this certain cat? Making a mess at home, with friends. But only when you’re at home. Other times it’s just resting and being calm – like all the cats. Now, I personally don’t like cats. At all. They are very unpredictable and I am quite allergic to some species of them. They also think they are the ones deciding everything, and usually are let to do so because “they’re cute” and dominated teh Intarwebz for some time. They’re not cute, as you know if you’ve followed the Marvel Cinematic Universe movies. They are not what they seem, and that movie sums up most cats very well. So, is this cutesy game like cats are – unpredictable monster in a box and whatnot? I’ll share you my opinions soon, in case you didn’t stop reading yet due to my catpinion 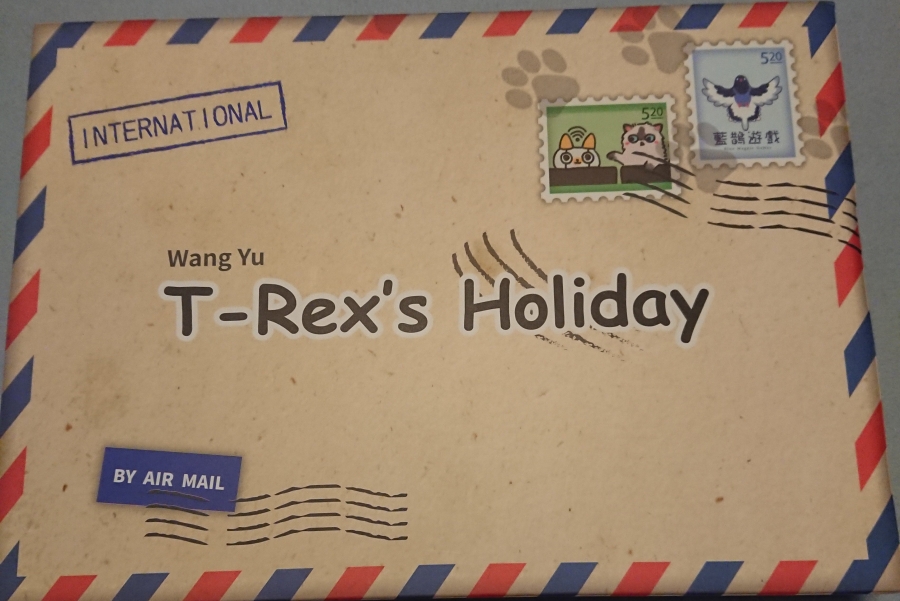 Tyrannousaurus’s/T-Rex’s Holiday is a game from 2019 by Yu Wang, published by Blue Magpie Games (and represented by Taiwan Boardgame Design). It is for 2-8 players and according to the box plays in 20 minutes.

Lies! This game will probably not play in 20 minutes especially with more players, I’d even say it’s about 10 minutes per player minimum and I don’t know if I’d want to play this with more than 4 and have not done so. Why? Because you need to think what to do to do well, if you just randomly place the numbers, sure you can play this even in 10 minutes, but why would you?

The gameplay is quite simple. A player rolls 3 dice, now here’s the beginning of the twist of this game – in secret. The player shows 2 of the dice and keeps 1 die hidden (this is the T-Rex die). Players fill in the numbers on the 2 visible dice into wherever they want and can on their sheet of a house (usually) following the placement rules. Now here’s the rest of the twist: then the hidden T-Rex die is shown and its number has to be filled in to a spot in an area it can go to if possible! The player rolling the dice changes and this continues until any player cannot legally fill in the numbers of both visible dice during a round. Points are summed up and the one with most points wins.

Now, it’s not that simple really. You know how in either of the Schön Clever -games you “just roll the dice and pick what you want, it’ll be fine”? Similarly, this one is deceptively easy to think it is a stroll in a park – or just simply making a mess in the house. It really is not, as you have to make a controlled mess or you won’t do well. A few well-timed, or bad-timed rather, hidden 1s, 4s or 6s and you’re screwed.

You have 4 different areas in your house on the sheet, at the top there are scratching poles and boxes and whatever the cats want to make a mess out of, let’s call this area 1. Let’s define area 2 as cat-trains, that seem to have dogs in also. Area 3 has 6 piles of 2 cans in 3 groups. Last area, here 4, is the Carp Streamer, a tube looking like a fish.

“What is this biscuit?” You might think. Well, when you get a biscuit, you get to cross over one already filled in number and you must do it immediately. Why would you do that? Well, if you’ve had to or decided to fill in a number illegally (Areas 2&4) to a spot or in a way that it prevents you from scoring (areas 1&3) you get to fix that! But you can’t fill in illegally, or why would you? Well, you have to if you are able to when the T-Rex die is revealed. Also, you might want to fill in a wrong number to the train, just to be able to fix it with a biscuit to score more points by filling in a correct number later. You can do this only once though and you can not fill in a number illegally to trains or the tube after filling in one illegally earlier. Also, you can only use a biscuit once per scoring place (4 places in area 1, 3 cars in area 2, 3 piles in area 3, and the tube in area 4).

How about the T-Rex die, where do I fill it in? Each area has dim numbers on the right side of the area: 1&2 for area 1, 3&4 for area 2, and 5&6 for areas 3 and 4. When the T-Rex die matches these numbers, you have to fill it in to that area. The numbers are dim because you can make the game crazier by randomizing the numbers in the beginning of the game by rolling the dice to change the numbers for each area. Haven’t tried this, not sure if I even want to as it seems very chaotic!

First off, the game is very cute and the dice are great! It’s also a fine game. I like the hiding of the die in the game as it can make painful moments and get reactions out of people. However, I would like my roll-and-writes to have a solo play possibility in them. Also The Wife is not the biggest fan of these games, so I’m not usually even trying to get her to play these with me and thus I mostly play these solo if at home. I also use Roll-and-write games as travel games, packing many into one box so I will make do with one set of pencils, just need the game specific papers and dice with me.

I mentioned earlier that the game time is a lie, and it really is. I can not see this game being played in 20 minutes if you try to figure out how to maximize your score and do well. You can play this fast if you’re a calculator, computer or a clairvoyant – for a human, it should not be possible. Or then you can’t talk at all, just roll the dice, hmpfh, next player, hmpfh, etc., you know the drill – But that’s no fun! The most fun in this game is when you reveal a hidden 6 and someone goes “Oh sh.. what did you do? Whyyyy!”, or if that happens 3 turns in a row!

Also, the terminology used in the rulebook is not the clearest and it should go through a clarification process or a reading by a native English speaker who preferably is accustomed to this type of games. Or at least it should be looked at by someone who preferably is able to proofread and edit instructional texts even if not a native English speaker. I’m still not sure if we’ve played the T-Rex die and the placing illegally parts of the rules correctly. I don’t think a game of this weight, and this much cuteness in it, should have a rulebook that has to be read more than once to understand the game fully. This is the most negative thing with the game in my opinion.

Now, if you’ve read any of my reviews, I evaluate the game according to if it has a space on my shelf. This one, I’m not sure, probably not at the end. Having played a few similar games and owning many, I don’t think this offers something worth keeping for me. This hidden die mechanism is fantastic and works well in this game, but the lack of solo and also my dislike of cats as a theme and it being too used (it’s nowadays like zombies or Cthulhu already!) are factors in this. The sheets are also the size that if I’d want to take this to a trip, I’d have to fold them. It’s good they are big enough and clear, but they are not suitable for my packing of multiple roll-and-writes into a box of one. I’ll probably try to get The Wife to play this with me before deciding the final destination, but I’m not sure if I want to take the risk if she seems uninterested – the risk of her disliking roll and writes even more. At least the box is not big, so it can wait a while for the decision.

Would you like this? You indeed would if you like cats or if you like roll-and-writes where there is a surprise element in a form of “haha” in the reveal of the hidden die and some player interaction due to that, player interactions that create emotions and possible outbursts. I also think that if you don’t have many games of this type, you should try to try this at least. It’s not that expensive even to not buy it if you’re interested, but I wouldn’t suggest it unless everything in this paragraph checks for you.

I’ve rated this 6/10 as it’s not a bad game, it’s a fine game. However, I can’t rate it higher for myself mostly because I’m close to a saturation point when it comes to roll-and-writes and they have to offer enough new to me while providing for what I want from these games. If I had not played about a thousand games and expansions, I would be way more impressed by this game! The rating might drop to 5, not lower, and it might go up to 7 if The Wife will play and like it and I’ll be surprised! 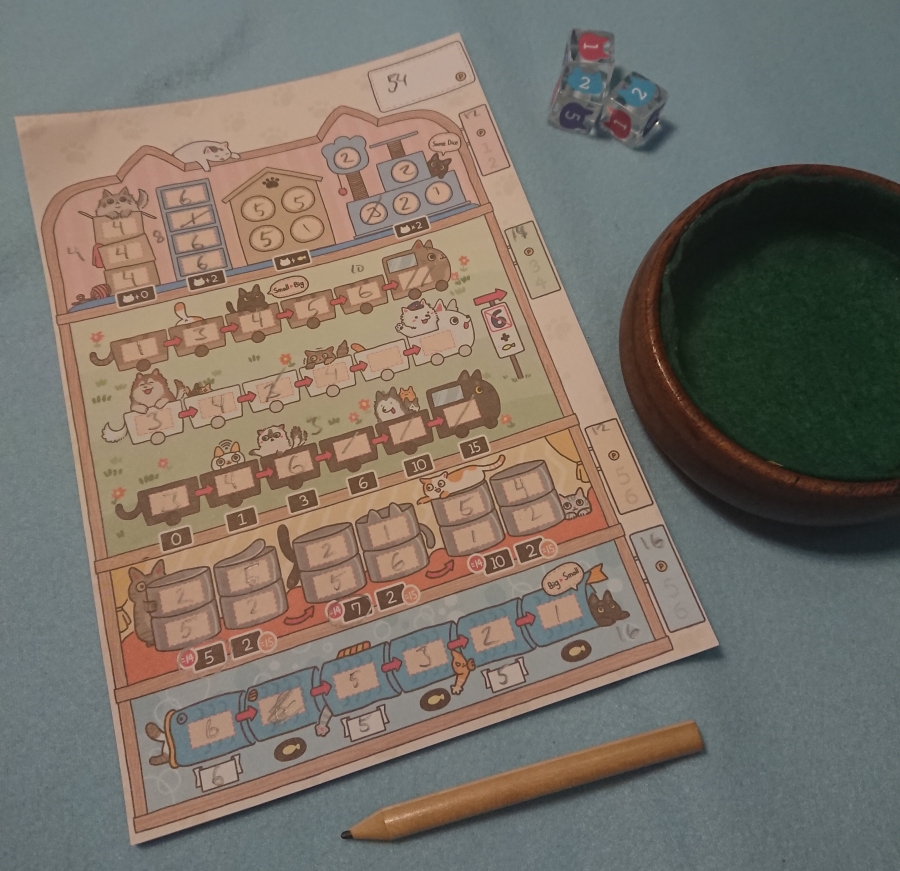 The copy of the game was sold to me with a “review discount” at Spiel’19, with no promises, besides an honest opinion on the game from me.